When it comes to competition, Mary-Kate Dorrlacombe knows how to keep her cool. She’s been participating in Special Olympics Iowa (SOIA) activities since 2011 and in that time she’s learned about sports, as well as friendship and socialization. Now, at 32 years old, she’s ready to take on her second trip to the Special Olympics USA Games in Seattle to compete in swimming. 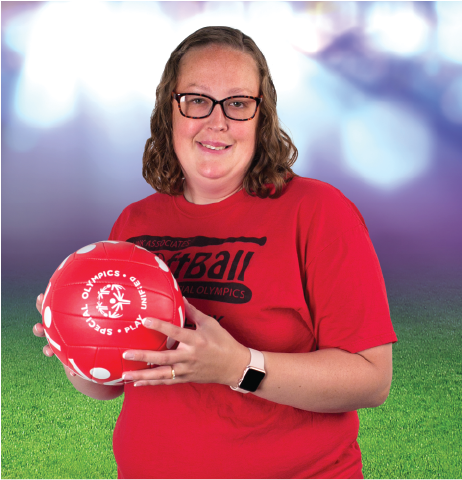 In 2014, Dorrlacombe attended the Special Olympics USA Games in New Jersey, where she swam the 50 meters freestyle and 50 meters breaststroke. She says she had fun and learned a lot. But Seattle will be a little different. For starters, she’ll be swimming the 100 meters freestyle and 100 meters breaststroke. Her coach, Mark Robinson, wanted Dorrlacombe to be challenged this time around. And she feels ready for the change. “Those are the ones I do at state and I can do it,” she says. “I just need to practice more.”

There’s a lot Dorrlacombe is planning to do in the coming months to prepare for her new level of play. Her delegation in West Des Moines will have swimming practice in March that she’ll attend, but she also plans on practicing on her own before that by lifting weights to improve her upper body strength.

“My goal is to do the best I can,” says Dorrlacombe. “I’m not an Olympian, but I’m there to do the best I can and if I don’t get gold, then I don’t get gold. I always just do it to have fun.” She’s also hoping to gain more than just medals at USA Games. “I want to come out with a good experience and maybe some new friends.” Seattle will be a chance for athletes to meet other athletes from different states and form lasting friendships.

And since she’s been to a USA Games before, Dorrlacombe knows just how exciting that new atmosphere can be. “There’s a lot of excitability and it’s kind of like going to a concert. There’s a lot of cheering going on and everyone’s happy. And when you go into that arena, you can’t be sad. When they announce your team name, it’s a good feeling. You feel like a celebrity. It’s different than state. It’s a whole other level than state.”

While she prepares for the games, Dorrlacombe also appreciates all of the support from her family and friends. Her sister living in California is planning on making the trip to Seattle to watch her compete. Her mom is also planning to attend the games and all of her Iowa friends have been asking how they can find her on TV during the coverage on ESPN. Dorrlacombe says she feels like she has a lot of people cheering her on.

Dorrlacombe is confident she’ll be able to represent Iowa well during USA Games. “I’ll make sure I have good sportsmanship and a good attitude. Make sure I smile. Make sure I’m uplifting, even to the other teams,” she says. “It doesn’t matter if we’re from California or Alaska. I hope it’s a great time for everyone who’s there, not just me.”