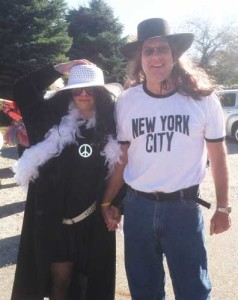 Mitchell Betsworth (left) and his dad, Troy, dressed as Yoko Ono and John Lennon for the 2015 Siouxland Polar Plunge.

Plunging for a Purpose has taken on a whole new meaning for the Betsworth family. Mitchell Betsworth has been a Special Olympics Iowa athlete since junior high and now at the age of 20, completed his sixth Polar Plunge®.

“I love running into the water,” Mitchell says.

Mitchell is a member of the Sioux City Knights, which had 10 athletes on three different plunge teams participate in the 2015 Siouxland Polar Plunge® on Oct. 24. The teams raised more than $18,500 for Special Olympics Iowa.

But, the tradition of the Polar Plunge® began long before the Knights were formed.

“We heard something 11 years ago on the radio on a Wednesday,” recalled Mitchell’s dad, Troy Betsworth. “We collected money the night before and I talked my brother into doing it with me. There was a need for raising money for Special Olympics and we thought we could help.”

It was just the two brothers the first year, but the team grew quickly, boasting more than 30 active plungers and chickens this year.

The team — and the donations — grew simply by word of mouth.

“They do it for Mitchell,” Troy explained. “Friends, family – people donate from all over the country to various members of the group.”

Mitchell knows the importance of receiving the donations and, each year, sends out a letter thanking everyone for donating and plunging, including a team picture with the note.

Polar Plunges are just one of the fundraisers hosted each year by The Law Enforcement Torch Run to benefit Special Olympics Iowa. With the money raised at these events, SOIA transforms the lives of athletes with intellectual disabilities, like Mitchell.

He began his SOIA career participating in basketball skills and flourished at Sioux City East High School. But once out of school, it was difficult for him to continue participating in Special Olympics.

“There was really nothing for our athletes once they graduated from high school,” said Troy. “We had a meeting with five sets of parents and I really just wanted something for my son after his post-high school years.” 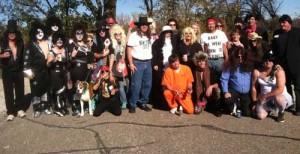 The Sioux City Knights teams raised more than $18,500 at the Polar Plunge.

And with that meeting, the Sioux City Knights were born. The team started three years ago with five athletes and now proudly claims more than 90.

Mitchell is not only an athlete and a fundraiser for SOIA, but he has also become a volunteer, helping with local swimming and powerlifting events. He will also will be taking the Global Messenger training on Dec. 4-5.

He is in a program at Western Iowa Tech called Life Academy where he works on life skills such as buying groceries, doing laundry and being responsible with money. He works two to three days a week at Opportunities Unlimited in food preparation and janitorial services. But his passion will always be with the Sioux City Knights.

“I am so happy to be on the Sioux City Knights team and be with all my friends,” Mitchell said.