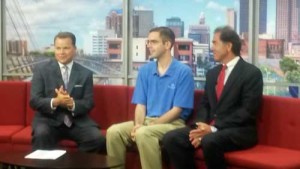 If you have seen some of our athletes on the news lately, it may have been part of a new partnership between Special Olympics Iowa and ABC Local 5 News in Des Moines.

Since February, SOIA has been featured in a series of live interviews during the midday news. The segments appear on the second Wednesday of every month at approximately 11:50 a.m.

“This has been a wonderful opportunity for us to not only create awareness of and for Special Olympics Iowa and the events we offer to individuals with intellectual disabilities, but to really focus the inclusion spotlight on our athletes,” said SOIA CEO Gary Harms. “Sabrina Ahmed, Elias Johnson and the entire WOI team have been great to work with and truly make the athletes feel comfortable in front of the lights and cameras.”

While our Global Messengers are used to giving speeches that they have written in advance, the live segments have given them the opportunity to practice their public speaking skills in a new way.

“I think that by being on live TV, for some it does put on a bit of pressure,” said SOIA Global Messenger Tyler Leech, “but I just acted like the cameras weren’t even there and I was talking to a friend. No conversation is scripted, really.”

If you are in the ABC Local 5 News viewing area, look for the next SOIA segment August 12!