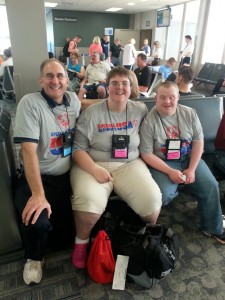 Gulbranson and Spencer each earned a gold medal at the 2013 Special Olympics Iowa State Bowling Tournament, qualifying them to apply for a spot on Special Olympics Team USA Bowling. They are among a 491-member delegation representing the United States in competition in 17 sports.

“We are so proud of Patrick and Lisa for being selected to compete at the World Summer Games,” said Special Olympics Iowa CEO Gary Harms. ““The hard work and dedication displayed by these two individuals is reflected not only in their athletic performance, but in all they do as representatives of their friends and families in our state.”

Robinson has been an aquatics coach for Special Olympics for the past 18 years. He is currently coaching for the local delegation at Cedar Rapids Parks & Recreation.

“Being a member of Special Olympics has allowed me to experience life through the athlete perspective, especially at my two national games experiences,” Robinson said. “I’ve grown as a person and I’ve developed lifelong friendships.”

More than 7,000 athletes from 177 nations will compete in 25 Olympic-type sports at the 2015 World Games, which marks the 14th Special Olympics World Summer Games. For more information visit

Other SOIA World Games connections include:

Join us for a World Games Opening Ceremony Watch Party!

The World Games Opening Ceremony will be broadcast LIVE on ESPN! Join us at Jethro’s BBQ n’ LakeHouse Saturday, July 25 starting at 7:30 p.m.! Enjoy food, fun and keep an eye out for our Iowa athletes on the screen!