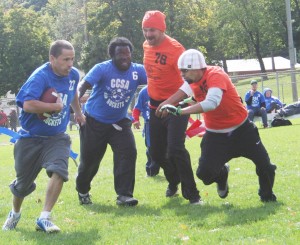 Punt, pass and kick…the Special Olympics Iowa State Flag Football Tournament gives athletes of all ability levels the chance to play America’s game. It is the newest state competition, with the first tournament held in 2011.

Flag football is a 5-on-5 non-contact sport played by both male and female athletes. When played as a Unified Sport, teams are made up of athletes with and without intellectual disabilities. Teams are divided into three levels:

The individual skills competition is also offered to allow athletes to train and compete in basic flag football skills. The development of these key skills is necessary prior to advancing to team competition. The skills include catching, throwing, running, and flag pulling.